When we as a sporting society think of males as opposed to females in sport or masculinity vs femininity, we think strength, deeper voices and not displaying emotions for masculinity whereas femininity is more caring, pretty and elegant. Sports such as Rugby or boxing are seen as more masculine whilst Ballet may be seen as more feminine, this is examples of ideas and beliefs that reflect the dominant norms within society related to gender otherwise known as ‘gender ideology’.

So straight away any female rugby athlete is looked at as more masculine, she may be called manly or butch, will be seen as straying away from the social norms of a female and may even be labelled as a lesbian despite society knowing nothing about her sexual orientation. These social norms and ideologies do not focus on empowering female NZ rugby athletes rather they tend to unfairly label them (yet this did not stop the women’s sevens team’s success – gaining a silver medal at Rio 2016, whilst the men’s team scraped into 5th place).  Throughout this blog, I aim to delve deeper into why women in sport are viewed differently to how men are viewed within sport, with my newly adopted sociological lens I have become more interested in the gender side of sport and aim to get a better understanding of the issues surrounding gender with a focus on New Zealand Sevens Rugby. 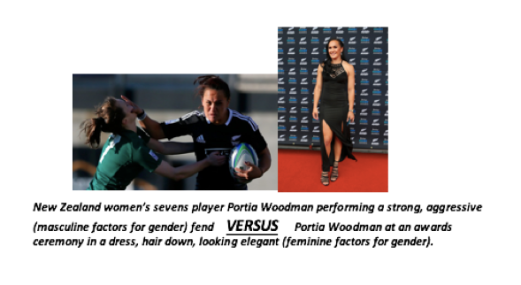 From a young age children, both boys and girls are taught how to dress, behave and expectations on how you should act depending on your sex, factors such as boy/girl names and toys are also applied to the child (if the parents know the sex of the child this can even happen before birth). This is an example of gender socialization, which is the process whereby people acquire the rules, beliefs and attitudes appropriate to their particular gender. For boy’s things such as toys including action men, war heroes or rugby balls and for girl’s toys including doll houses, Barbie’s or pretty dresses can influence the way the child perceives how they should act and behave (either in a masculine or feminine way). Another example is how children play, from my childhood I remember playing pretend WWE wrestling with friends but then being told off for doing it with my younger sister as it was an expectation of how a boy should not behave towards girls as she was more delicate or it wasn’t ‘girly’.

Nowadays women’s sport is shown on television more and more, competitions such as Women’s NPC is occasionally televised, the Women’s ASB Classic NZ tennis tournament and Hong Kong Women’s Rugby HSBC sevens competition are both annually televised. It was not always like that, women’s sport was very rare if ever televised but since the early 1980’s it has increased dramatically to what it is now because of higher female participation in sport. This is in part due to new opportunities, global women’s rights movements, increased women in sport media coverage roles (examples include Melodie Robinson and Jenny-May Clarkson) and also government equal rights legislations. However, I believe that certain aspects are influencing female participation in sport and leading women to be cautious when wanting to play sport. These are aspects such as ignorant members of society resenting the change, few amounts of women represented in decision-making roles in sport (no female has ever been CEO for NZRU) and also the threat of homophobia from society making females less likely to want to participate in sport out of fear of being labelled a ‘lesbian’. The homophobia for women in sport is a barrier many may not think exists but it is a large influence according to an article by the board director of the Australian Womensport and Recreation association Danielle Warby who interviewed a female athlete who plays basketball for Australia (2014), this athlete stated, “There is the stigma that all female athletes are or ‘get turned’ into lesbians anyway. It frustrates me that being someone who was in a heterosexual relationship for most of my life I am giving this stigma validity”.

If we take a critical lens approach in relation to gender in sport and look at this topic we can see that gender inequality is still a big issue and the sporting world remains a largely male dominated industry. Slowly but surely things are changing such as more women in sport reporting roles (examples include Hayley Holt co-anchoring The Crowd Goes Wild and Meghan Mutrie hosting segments on The Rugby Breakdown). As well as more Women’s sport being live and televised on Sky TV. As opposed to how a functionalist would think of only the positive things sport does for Women such as a sense of empowerment a critical lens of thinking has us question the taken for granted values and behaviours in sport (such as broadcasting rights, prize money, uniforms of team).

What are your thoughts regarding Women in sport and the current state of New Zealand’s male dominated sport industry? Are we happy to have ‘primetime’ Sky Sport 1 slots dedicated to only male sport? Or is it time for change and equality within New Zealand’s sport industry, after all the current HSBC Sevens rankings have NZ Men ranked at number four while the Women are number one.

Warby, D. (2014). Homophobia in sport and why it’s different for women. Retrieved from http://daniellewarby.com/homophobia-in-sport-and-why-its-different-for-women/

3 thoughts on “Gender issues and interesting aspects within sport in New Zealand.”